When the Metaphor Becomes the Monster: Exclusive

Remembering EDOnism
When I faced for the first time the idea to shoot a movie in Tokyo, while I was discussing the hypothesis with then soon-to-be EDonism producer Lorenzo Fantini two years ago during his latest stay in Italy, I immediately thought that the script should have deal with something gigantic, frightening and epic. No other city in the world is able to suggest the feeling of a majestic and intimidating human beehive as much as Tokyo. It seemed that all my obsessions for movies like Blade Runner, Akira and Ghost in the Shell as well as my interest in Shintoism, Ukiyo-e art,  and Suehiro Maruo, would have take me sooner or later  to nowhere but to the enigmatic land of geisha, samurai, Godzilla and hi-tech marvels.  As usual, the way I fleshed out the concept and the story was closer to the process of conceiving a painting or a comic than to a traditional pre-production of a movie.

Read the article at:  http://roberthood.net/blog/index.php/2011/10/26/when-the-metaphor-becomes-the-monster-exclusive/
Posted by AFANART at 12:08:00 AM No comments: 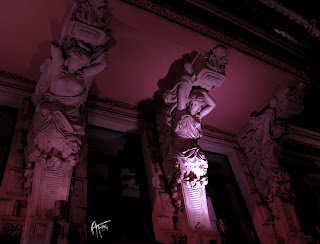 Linea Gustav by Alessandro Fantini | Make Your Own Book

More than a decade of meditative studies around the mysteries of Being projected on canvases, papers and videos, constantly fluctuating between stylistic reminiscences of Flemish masters, symbolism, surrealism and glimpses of neorealist dimensions tied to waking dream intuitions and self-induced hallucinations; more than 450 artworks generated by an aesthetic Stakhanovism nurtured since the first childhood experiments in comics and anime; more than a simple artist obsessed by his own self-centered realm or the latest artistic trend, Alessandro Fantini has always conceived his creative activity as a privileged “detector” of all the unspeakable and enigmatic realities hidden behind the material as well as spiritual sphere.

The - Ab Urbe Incognita - solo exhibition project represents a first ambitious attempt to offer an organic and reasoned insight into one of the most prominent theme featured through the whole saga of his oil painted visions: the Unknown Cities built inside human minds.

Biomorphic architectures sprouting out from apparently dead structures; enigmatic archways leading to darker or brighter alleys crowded with memories or wasted by nihilist premonitions; shimmering staircases introducing to hermetic doors protecting truths inconceivable by rational knowledge; retro-avangardist thresholds inviting to eerie interiors encrusted by ambiguous entities unable to reveal their real nature; dizzy shadows protruding from oceans of silent skyscrapers erected on the uniform oddity of modern-day society. Still bigger and far more frightening than the entire world wide net and any imaginable artificial intelligence, the human brain can unfold never-ending cityscapes where each feeling, emotion, thought, idea and fantasy lives as a tormented inhabitant looking for a way to draw the definitive map of a place without definition (a concept that Fantini started to develop many years before Nolan could give a cinematic rendering of it in his movie - Inception - ).

"The Insomnia of Nimrod" is just one of the most evocative paintings of the many ones Alessandro Fantini worked out during his relentless quest for the cartography of the Unknown.

I entered the @SaatchiOnline #showdown competition. Please vote for me! http://www.saatchionline.com/showdown/view/showdown/8/artist/8120 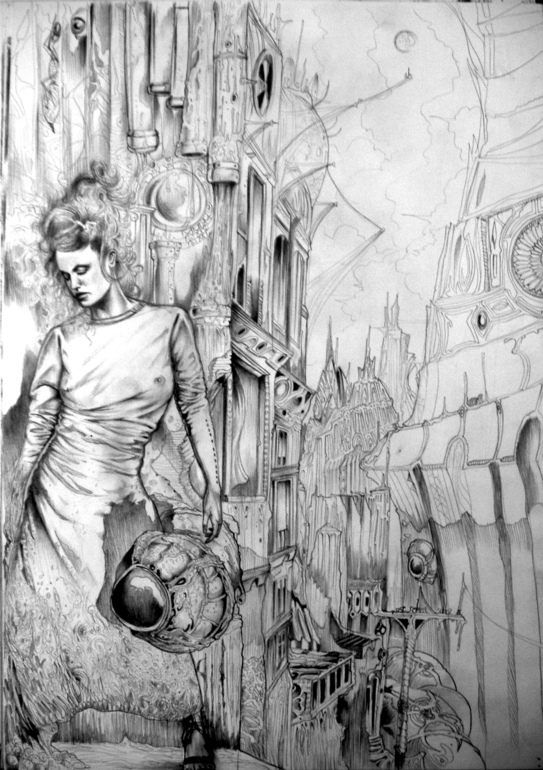