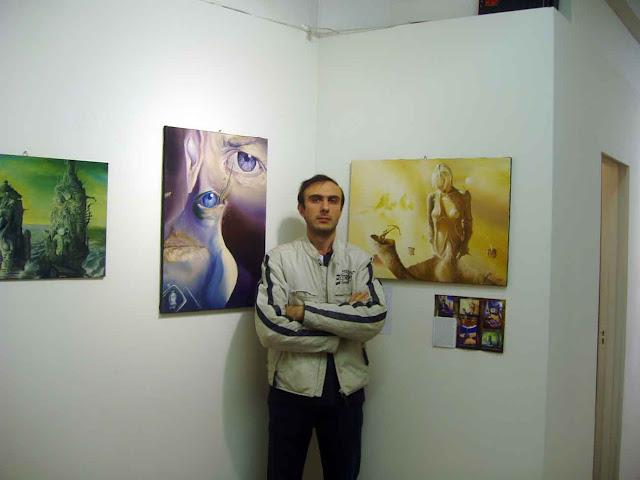 In every artist’s life the first source of inspiration comes from his own birth-place, the matrix of his second existence after the first one experienced inside the mother’s womb, a heavenly version of the more dangerous life he has to spend into this illusive reality.

Imagination appears to be the result of a chaotic and puzzling patch-work process of ideas and impressions, following the changeable mood of each human being surrounded by his intimate post-uterine environment.

Alchemy, according to me, would be one of the better allegorical explanation of the creative phenomenon. Looking once in my early adolescence at “Melancolia 1”, a celebrated Albrecht Durer’s engraving, for the first time I realized what it means creating and having a pure attitude towards being mesmerized by naked medianic visions. I learnt that giving life to chaos, dead textures and wild matter is the first step, called “nigredo”, when the work is incomplete, a “black opus”, but containing already its potential charming shape. This primordial state of awareness is characterized by sadness, melancholy for the lost purity and perfection. When I began drawing and writing during my childhood, I desired to reach an ideal order of my interior disorder through a way of representation of desires and obsessions (symbolized by volcanos, castles and the Freedom statue), but at that time, over fifteen years ago, I was deeply influenced by popular and commercial media, like cartoon tv series, comics and gamebooks, so I tried to emulate them with my individual faith in a narcisistic aesthetic concept, without acquiring a real distinctive style.

Year after year I kept elaborating an independent taste, refining the first suggestions with a more mysthical and intuitive approach to creative practice.

Since I began to deal with oils, phials, brushes and canvases I use to spend entire afternoons staring at my canvas or feverishly painting several layers of background colors over which often arches and tresholds pop out embracing the growing morphologies of protoplasmic entities. One day, one of these bodies appeared on my large sketch book sheet like a flesh plant, gazing at me with a silver eye floating over a thin space between the architectonical gaps. Suddenly I realized how much my art owed to the phenomenon of “the mitotic phase”, the separation of the cells during the formation of the embryo. Every time I stay before a blank canvas I just let the seed of Vision drop from the point of my brush in order to fertilize the ovule hidden under the white void. 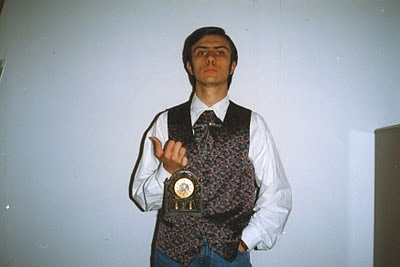 Consequently I never try to work on a definitive theme., just searching for the best pictorial way to renderize a particular state of mind I have at that specific period. It can be said that I mould atmospheres, not just painted images, but free spaces where it would be possible to everyone to imagine all kind of adventures and disasters.

Surely, anyway, seeing to the long saga of pictures I painted until now it could be possibile to interpretate a “leitmotiv” and recurrent elements. In my case, the fil rouge” is embodied by the musings about organic aberrations, the transmutation of matter, hybrid bodies and architectures, the mythological figure of the androginous, the morbid and marvellous world of Abruzzo aesthete d’Annunzio, but also my own relationship with the social and cultural history of our times.

Since Leonardo’s sketches of stormy landscapes one of the main topic of the artistic enquiry through the centuries has been particularly the instability of reality, his violent changing and furious deformation produced by human and nature irrational beings. Romanticism, expressionism, surrealism, action painting, were all just attempts to contain or at least control the pain provoked by human impotence before these arcane forces.

In this sense, the female body is the most frightening and powerful symbol of cosmic change. A woman has never the same shape during her lifetime, she’s continuously subject to anamorphic power when she become a young girl, pregnant, or enters in the menopause. She’s the logarithmic description of the prodigious harmony of confusion, that’s sexual excitement, a mix of desires and animal instincts. Michelangelo Merisi, known as Caravaggio, was the first painter who dared to represent this female reality in all its human and turbulent concreteness.

Every time I come in Rome I want to see Caravaggio’s “Saint Matthew’s Vocation”. It was surely a milestone of mimetic pratice in the whole history of art. For the first time a painter showed us a religious scene so close to our every day experience, that we suspect he didn’t want only to illustrate an evangelic tale, but suggest how the scaring of humanity through a conventional situation illuminated by a light filtered through a dirty window, could destroy our preconceptions about the so-called reality and push us thinking that also behind the absence of the traditional renaissance beauty there would be the magic of an “epiphany”, a revelation.

Indeed my infatuation for this “neo-platonic” shadow-light effect grew after I watched “Blade Runner”, where I discovered many references to Caravaggio,Van Eyck, Vermeer and Hopper.

One of the highest demonstration of this influence is “Erotriade”. In this picture I wanted to reflect my own de-construction of the evangelic topic. Here the prophet of Christ, saint John Baptist, having my face, offers to Erodiade the head of Salome, exactly the opposite of the original story dramatized by Oscar Wilde. I spent about one month on it, emulating in a certain way Caravaggio’s technique to not use background drawing, but only covering entirely the blank canvas with a kind of chromakey in ultramarine blue mixed with brown, over which I could paint the main characters beginning with the clearest colours and shading them with the darkest, sometime using my fingers to amalgamate them with the dominant tone. 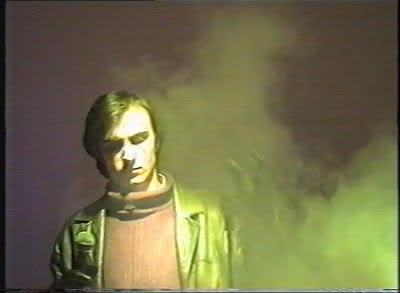 Like many artists before me I've been profoundly seduced by the imagery of “Alice's Adventures in Wonderland”. Lewis Carroll was not only a great story teller for children and maybe the first surrealist in the history of literature: he was a brilliant visionary prophet of what the humankind powers to trespass our limited reality could reach within the next centuries. When he wrote "Through the looking glass" he was showing the enormous potential of human imagination to penetrate the laws of the physics and mathematics in order to control them and to blend them to satisfy the most improbable desires. In his prologue to Carrroll's works Jorge Luis Borges wrote that the english novelist has to be reminded basically for his virtue to create reasonable paradoxes, those ones we can experience only in the dreams realm. Those ones of the Web and of Second Life, probably the most challenging mixture of role-playing game, sim multiplayer and fantasy e-commerce, has demonstrated finally that now every one could dream about his "alter-ego", a doppelganger or an alternative paradoxical reality where it's up to us to decide the amount of paradoxes and the depth and complexity of concrete unreality.

So why not project the collection of real oil on canvas of a real artist in a totally unreal dimension where art galleries are located inside esotic gardens and villages and people can met each other for an unreal vernissage? This was the attempt of the exhibition I held in 2006 inside the unreal space of the Muse Art Gallery, one of the many galleries opened in the Second Life domain. The irrational desires become virtual realities, a delightful paradox that express the essence of my art.

The concrete unreality of Second Life, just like our own life built on layers and layers of different individual perceptions, is the result of a mixture of visible and invisible, ethereal fantasy and high craftmanship of creative minds powered by the need to remove the limits of human life.

In the same way the texture of our flesh and desires is animated by mysterious streams of energy, the same ones which permeate the organic structure of animal and astral beings. A scientist and follower of freudian theories, Wilhelm Reich, defined this one with the name of “Orgonic Energy”, the attraction of free electrons to life itself, an astounding force that human people can experience at their highest intensity during their orgasm. But this is more than a simple perception of pleasure or the mechanical conseguence of sexual arousal. In my artistic vision the Orgonic power manifests itself in the most shocking convulsion of flesh, in the most spasmodic acrobacies of erotic delirum, in the hallucinations of desires which conjure to elevate the human spirit to the heights of ecstasy and mystical revelation.

Some of the oil paintings I showed in the “Orgonic Poem” collection, weren’t intended just to be an easy way to attract the attention of people towards an eerie concept of eroticism and perversion. I didn’t paint them simply focusing on illustrating the Orgonic Theory. Instead I discovered all by myself the influence of this eroto-mystical vision of chemistry and physics just after I painted these images, like someone who has been able to intepretate his dreams after reading the books of Freud. They offer, instead, another visual key useful to open the gates of the cosmic mistery that envelopes us, in the so-called Real Life as well as in the Second Life.

Because we know, in both dimensions the most terrifying and seductive entities for our human identity are always SEX and DEATH. It remains the unique path towards the spiritual discovering of the Truth we cannot reach here, neither in the Real nor in Second Life. 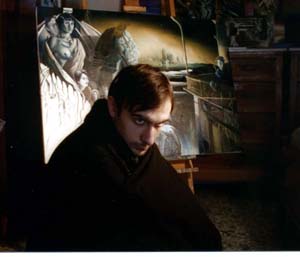