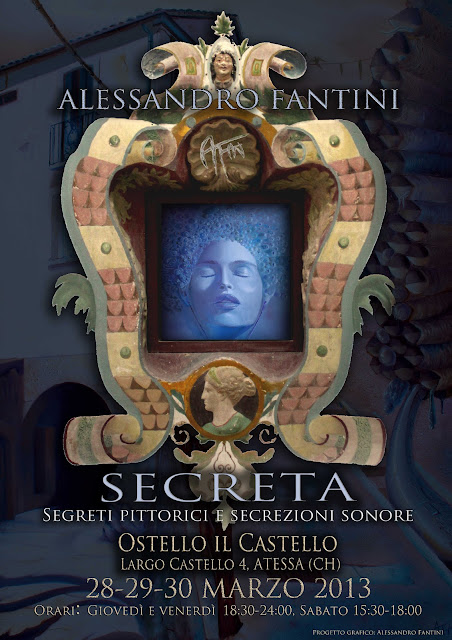 "No place is without a Genius", the ancients used to say. A statement well suited to spaces shaped by human ingenuity that have been able to stand up to the ravages of time by opposing the strength of a mysterious breath of life, a hidden force unknown to the same creators which infused it through the emotional brand of their lives. Just like microorganisms which, imprisoned for thousands of years in a state of hibernation within salt crystals, reproduce as they get back in contact with the external environment, so the memories, the vibes, the moral atmosphere of the time when the "genius loci", the soul of the place, proliferated into the rooms and in the interstices of the walls, awaken as soon as the aura of the first visitors of that architectural organism stimulates its invisible nerve endings.

The special event entitled "SECRETA" hosted in the tuff gallery of the ancient The Castle Hostel, a palace overlooking the homonymous square since 1565 in the medieval ward of Atessa in Abruzzo (Italy), is the new experimental solo show conceived by the “multimedianic” artist Alessandro Fantini. After the group shows of London, Rome and Los Angeles, he will be returning to exhibit in his native country, offering a blend of oil paintings based upon the theme of the emotive implications of the contemporary environmental dimension, with particular regard to the increasingly convulsive and restless nature of the local one.

From 28th to 30th of March, the "pictorial secrets and sound secretions", namely the paintings and electronic music composed by the artist himself, will try to evoke the "genius of the place", working as the aesthetic reagents in a collective experiment of "spiritual alchemy ", cocooned by the atemporal frame of the antique palace that has just reopened its halls to the public after a long period of restoration.

The Californian artist Kobina Wright featured my art on her blog and she kindly interviewed me about several multimedianic topics, so I thoroughly urge you to not miss it. http://www.thewrighteronline.com/2013/03/alessandro-fantini-multimedianic.html

Here is an excerpt from the interview:

"(...) when I think about Art, I instantly imagine a dark gigantic pool where each human being learns to develop his own breathing methods and swimming styles. I bet many art connoisseurs will be dismayed to find out that the Greek musician Vangelis is also a talented painter, that the Italian painter Andrea Savinio was also a composer and a writer, or that the Austrian drawer Alfred Kubin wrote a genial novel in 1908 anticipating the themes of movies such as “Dark city” and “Matrix”. These are just few examples to demonstrate that art is, first of all, a primeval urgency that can be declined in many different forms through the same individual sensibility and aptitude.


Therefore I coined the neologism “multimedianic” to better define my versatile creative system by using the metaphorical image of the “medium”. During the séances the latter is the living channel through which the spirits are able to manifest themselves into the human dimension. Thus they can communicate by sounds or words spoken by the medium or formed on the “ouija” board, or even reveal themselves in material shapes like the so-called “ectoplasm” emitted by his body.
Obviously I don’t mean to give scientific credit to these paranormal phenomena: I just consider them an effective poetic way to describe my own artistic process, whose main precondition is the urge to translate, often simultaneously, an over human language through several human procedures able to preserve its selfless and outlandish quality into their wide range of expressive codes. That’s why, even when my writings, paintings, songs or movies are transpositions of my own mood and sensibility, at the same they’re the simultaneous aesthetic manifestations of a mysterious stream of visions and feelings residing in our “chromosomic memory” of mammals with large brain(...)"
Posted by AFANART at 3:11:00 AM No comments: