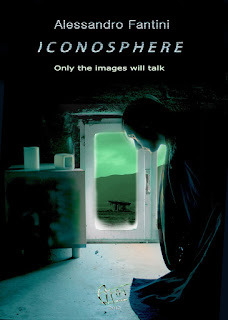 A multimedianic blend of theatre, fiction, videoart and literature. Recluse in a remote hut on the edge of time, an unknown cenobite tries to decipher the echoes of humankind memory, torn between true stories and fictitious images, looking for the debris of his own soul.

When dates and units of measurement cease to have any meaning; when between memories and hallucinations new bonds of blood arise; when the simulacra eat pieces of truth torn from the images; when the perception of the ego is just a sob of boredom among the swarm of collective time; when the intuitions of the future fall into the silence of a prophecy in a vegetative state; when the transcription of the newspaper is indistiguibile from an accident report; when the soliloquy is one of the many disguises of the interior anarchy; all that still claims to be (by being recalled) fluctuates in the iridescence of the Iconosphere.