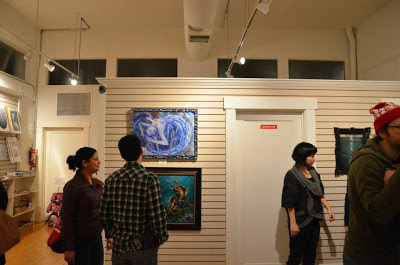 If “Music is the pure movement of thought” as Schopenhauer once wrote, then painting could be defined  the crystallization of emotions  nurtured by  the sound of that movement.
Music has always worked as a physiologic solution allowing my artistic projects to achieve their poetic and spiritual lubrication, and let them swim in the maelstrom of perceptions. While I was painting this canvas the notes and words  of “Song to the siren”  written by Tim Buckley and performed by the watery and abyssal voice of Elizabeth Fraser, were constantly playing in my studio, flooding my physical and mental spaces as a tender whirling backwash. I think that diving into the abyss of soul towards the dark and passionate mysteries hidden within, as the text of the song seems to suggest, means somehow to reach the secret altitude of our most human feelings.
The “Painted Sound” group show is like a tracking shot of a greasy sound-scape, namely the ever mutating movie that music will always shoot inside our mind and will project into our heart.

AFAN Alessandro Fantini is featured with his new oil painting "Je ne sais quoi" dedicated to "Song to the siren" composed by Tim Buckley and Larry Beckett in 1968 and sung by Elizabeth Fraser 15 years later on the album "It'll end in tears" by "This Mortal Coil", in the upcoming group show titled "Painted Sound" held at the Flower Pepper Gallery in Old Pasadena, California (USA) from January 26th to February 28th 2013. Keep an eye on this blog and on the group show's website where more news and insights about the event will be revealed in the next weeks:http://paintedsoundshow.jimdo.com/artists/