My answers to the fineartamerica.com interview:

1. If someone were to film a documentary about your life, how would the story go?

Actually, since my adolescence I started writing a sort of screenplay of my own life, just like I was aware I was going to shoot it by myself at a later stage in my existence. Indeed in 2012 I’ve directed a bio-documentary about my artistic path up until that year. The opening scenes showed the landscape of the Sangro Valley in Middle Italy, where I was born and where I currently live. The image of the Sangro river (from the Spanish word “sangre” meaning “blood”) starting from the snowy mountains and ending in the Adriatic Sea, is presented as a metaphor of the inner stream of visions and irrational desires nurturing my creative quest from childhood to these days. Somehow every painting, movie, musical composition and novel I’ve created until now could be defined as a blood cell floating along the mystical side of the river. Therefore, the topography of the valley could be used as an allegorical map of my own human and artistic odyssey. 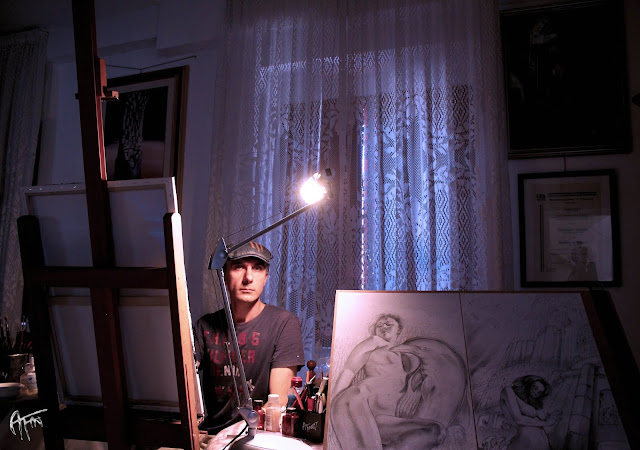 2. What were your biggest triumphs and challenges? What decisions did you make that shaped or changed the direction of your life? Who influenced or mentored you along the way?

To be honest I think that nowadays the fact of being a creative person is a challenge itself. No one will take your artistic vocation seriously until you’re able to show that you’re making a living with it. Maybe the biggest triumph is when you’re completely free to create without being forced to constantly show or explain what and why you’re working on certain projects. Choosing to not become a teacher or a factory employee after graduating with honours to keep working on my artworks, was the most important and daring decision I’ve taken in my life (however in Italy is hard to make a career as a university teacher without the support of a family of teachers or influent people).
I’ve always been a self-taught artist. Aside of the lessons of masters such as Vermeer, Dalì, Magritte, Giger, Wyeth, Kubrick, Bunuel, Lynch, over the years no one influenced or taught me anything useful. On the contrary, I must thank every art critic or professional working in the arts and showbiz who tried to convince me that an artistic career was a colossal waste of time. In a certain sense, the sheer amount of art I’ve produced over the last two decades is even the natural feedback to the defeatism surrounding me. It’s like I need to create an imaginary world where I can find a shelter from the nihilism and the brutal pragmatism of contemporary society, allowing me to give an aesthetic interpretation of the latter.

3. Did you pursue your childhood dreams, and are you happy with where your life is at today?

Being an artist means preserving the playful anarchy of the childhood. Only in this attractive chaos it’s possible to exert the freedom to create new rules and aesthetic dimensions. Like Nietzsche once wrote, maturity means rediscovering the seriousness one had as a child at play. The artistic activity is the better way to preserve it. Though, happiness isn’t a term relatable to the creative process. For me the main motivation of an artist life is to constantly challenge the boundaries of his own “safety zone”. That basically means living in a persistent yet voluptuous state of prolific anguish.